Cobie Smulders is a Canadian film and television actress born in Vancouver, British Columbia on April 3rd, 1982. Her first television work was playing a character named Zoe in "The Wish" episode of Special Unit 2. She made bit appearances in episodes of Jeremiah and Tru Calling before landing a recurring spot on Veritas: The Quest as Juliet Droil.

In 2005 Cobie Smulders played Leigh Ostin in four episodes of The L Word. She appeared in "Luminous", "Loud & Proud", "L'Chaim" and "Lacuna". Following which, she appeared in a series of shorts and made her next TV appearance on the pilot episode of How to Make It in America, playing a character named Hayley.

Beginning in 2005, Cobie landed a starring role on the CBS comedy series How I Met Your Mother. Cobie played a Canadian woman living in New York City named Robin Scherbatsky, and was frequently presented as an on-again/off-again love interest for the program's main character, Ted Mosby (played by Josh Radnor). 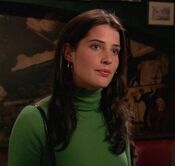 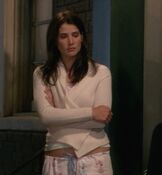 Add a photo to this gallery
Retrieved from "https://tvdatabase.fandom.com/wiki/Cobie_Smulders?oldid=259992"
Community content is available under CC-BY-SA unless otherwise noted.